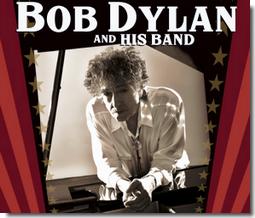 Last night Bob Dylan played the first of a series of five concerts at New York City’s Beacon Theatre, the final stand of his current tour.

I thought I’d probably seen my last Robert A. Zimmerman performance a few years ago. I’ve seen him live quite a bit over the years, and that last show was a good one, and for a variety of reasons I just felt it best to leave it at that. (One also has the impression that Dylan really enjoys playing to the new faces in the crowds, rather than old fogeys like moi.) However, through the intervention of a very kind friend, myself and the missus found ourselves last night once again breathing the same air as Bob and his five superb sidemen: Tony Garnier, George Recile, Stu Kimball, Charlie Sexton and Donnie Herron.

Things had changed since our last time seeing the ever-rolling Bob Dylan show. For one, Bob was spending a lot more of his time center-stage at the microphone, sans instrument besides the occasional harmonica solo; most of his time at the grand piano was on uptempo numbers, and not all of those. (Guitar is a distant memory—that was some other Bob Dylan entirely.)

Another change was the splitting of the show into two sets, with an intermission. Although many have understood this as a concession to Dylan’s age (currently 73 1/2) I found it to have a quite salutary effect on my enjoyment of the show, turning it into two more digestible parts, instead of one really long one (about two hours of music in total). Thinking back on it today, I think it was kind of like the effect of listening to side one of an LP, waiting a few minutes (maybe lighting up a cigarette) and flipping it over for side two. If one grew up with LPs, one knows it was very common to say something like, “Side one is alright, but side two is fantastic!” The physicality of there being two sides also put the respective songs in different mental boxes. (That’s lost in the digital environment, where everything is just one continuous stream, or you cue it up in your own whimsical order.)

And the third change from the last time we saw Dylan is perhaps not unrelated to this: The performer who was always known for playing whatever he wanted, whenever he wanted (so much so that people would gamble in an internet pool to see who could come closest to guessing what he would play) is now playing the very same songs in the same order every night. So if it’s an LP, he wants everyone to hear the same one.

And—wouldn’t you know it—side one was alright, but side two was fantastic. Given the fixed nature of the set list, this is obviously no accident: Dylan wants to set the table, build you up, and put you away. And that’s pretty much what he did. And it’s notable that he did it with a set list dominated by recent songs: six from his most recent album Tempest, numerous others from the previous several albums, and only two from the decade that dare not speak its name (the one that came after the 1950s). 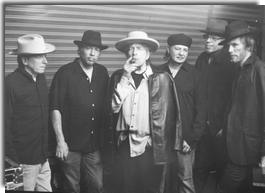 In reviewing Dylan, one has to address his voice. The dog with his leg caught in barbed wire (that ageless description is attributed to Missouri folk musician Mitchell Jayne) has been gargling with rocks for these past couple of decades. The limits of his voice are most apparent on the rockin’ tunes, where it can take some effort to distinguish anything beyond gruff barks, as indeed on the song “Beyond Here Lies Nothing.” But the band, including Dylan when he’s on the ivories, are so smooth and hot that they carry these performances effectively.

It is on the ballads that Dylan can still sing to stop the show, and he certainly did it on “Forgetful Heart,” in the middle of the second set. He’s been singing this intense, brooding song of lost love and spiritual pain center-stage at the microphone since he released it in 2009, but there was nothing stale about this performance. It was as if he were singing it for the first time, and feeling each and every word. There was no doubt, hearing it, that this was a one-off performance; he will sing it and feel it completely anew tomorrow night.

After plumbing these depths of alienation, Dylan then goes to the piano and sings “Spirit On the Water,” which seems about as playful, loving and even teasing a song to his muse and Creator as could be conceived. The sudden switch underlines the truth in these lines from an earlier song in the set list: “Happiness is but a state of mind / Anytime you want you can cross the state line.”

He closed the second set with three songs from Tempest, each sung with care and passion: the dark “Scarlet Town,” the again playful and loving “Soon after Midnight,” and the stunningly resonant “Long and Wasted Years.”

He used to close his sets with “Highway 61” or “Ballad of a Thin Man” or some such big, old, iconic tune, to get the crowd on its feet and demanding the encore. It’s no small testament to his still-intact powers that he can pull off the same thing with such a recent song instead, and it is quite a performance, by both Dylan and his band.

The two song encore begins with “Blowin’ in the Wind,” and I would continue to maintain that one of the most remarkable transformations he’s ever made to a song in concert is what he has done with this tune. The jaunty, sweet and cheering performance enables the song to make sense in an altogether new way: Instead of being mournful that the answer to all those big, profound questions is beyond grasp, just out there blowing in the wind, the song now seems to be announcing happily that there is an answer to all of those questions, and how wonderful it is that it’s right there in front of us, blowing in the wind …

For all of that, the biggest rabbit Dylan pulls out of his hat is the closing number, his rendition of “Stay with Me” by Jerome Moss and Carolyn Leigh (previously written about in this space). Sitting at the piano, he turns an all-but-forgotten song that Sinatra sang in 1963 into his own quite naked prayer and seems—at least to this listener—to tie up every loose end left by the previous eighteen songs.

If fate ordains that this turns out to be the last Bob Dylan show yours truly will see, then that will be a worthy final image to retain.

This was a sold out show, and it’s worth reflecting on Dylan’s achievement purely as a matter of showbiz, that he can still fill houses after more than fifty years of performing. Others have had successful careers as long as his, but, when you think about it, all of them—from Sinatra to Mick Jagger to Bob Hope—have done so by essentially sticking with what worked for them from beginning to end. Dylan instead has taken what’s worked for him and stuck it, er, somewhere … over and over again. He’s been through so many changes, and remained loyal only to some sense of truth inside that calls him to account. And so he fills a theatre in New York in 2014, about half with older people who come to wonder how he keeps doing it, and half with people in their 20s or even younger who are discovering his work newly for themselves.

I bet we’ll still be wondering at how he did it long after he’s gone.