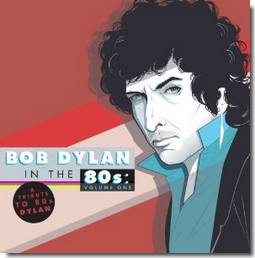 Tribute albums, or albums dedicated to the songs of one particular songwriter, come and go, and probably no living musician has had more such albums made in his or her name than Bob Dylan. This new one, however, called Bob Dylan in the 80s (Volume 1), seems unusually pure in its fundamental motivation. It does not purport to contain the best ever Bob Dylan songs and certainly not the most popular ones. It does not feature artists who are household names, and no one could be expecting it to sell in enormous quantities. Its clear motive instead is to lift up songs from Bob Dylan’s most maligned and least hip decade. There was no perennial critical favorite like Blonde on Blonde from Dylan in the 1980s, no classic of heartache like Blood on the Tracks, no universally lauded return-to-form like Time Out of Mind, and no chart-topper like Modern Times. There was Saved, to start out with, and Under the Red Sky to end with. Both albums (though more the former than the latter) have their advocates, but when they arrived they seemed to disappear promptly into deep pools of opprobrium. And the albums in between generally didn’t do a whole lot better in terms of popular or critical reception. Bob Dylan in the 80s (Volume 1), then, seeks to help people listen freshly to some of the lesser-known work of America’s most remarkable living songwriter, and enjoy aspects of it that they might not know about or might have missed. In this, and in just being fun, it succeeds. 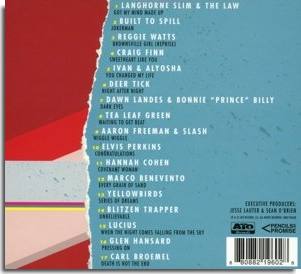 Whenever it comes to cover versions, it’s always a little mystifying as to why someone would record one that is exceedingly close in style and spirit to the original. It may be out of a surfeit of reverence for that original, but it’s hard to understand the point of it. Well, as someone once said, “don’t criticize what you don’t understand,” so instead I’ll highlight the tracks that work for me (and most of the album does work for me). A curious discovery for this listener is that some of what I would have considered the strongest songs make for the least-interesting covers here, and some of what I might have categorized as Dylan’s throwaways really shine in the hands of other musicians.

The album kicks off—and it does kick—with “Got My Mind Made Up” by Langhorne Slim & the Law. Now, this doesn’t stray far at all from Dylan’s original in style, but in spirit it far exceeds that strangely flat and plastic recording from Knocked Out Loaded featuring Tom Petty and the Heartbreakers. Slim and his gang are bursting with crazed urgency and exuberance, and what seemed to be a nonsense song gets rescued, revived, and pushed down the stairs.

Reggie Watts gets the prize for the most dramatically transformed Dylan song, with his take on “Brownsville Girl.” In contrast to Bob’s big, declamatory (and quite glorious) recording, this one is melodic, groovy and insouciant. There’s not a hint of excessive reverence here, and Watts demonstrates that a song you couldn’t imagine hearing in any other way can be heard in another way. It grows on you too. 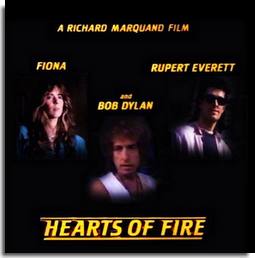 “Night After Night” is a song Dylan recorded for the soundtrack of the woeful 1987 movie “Hearts of Fire,” and his original recording sounds similar to his performance in that film, just a piece of feckless self-parody. Here, however, the band charmingly known as Deer Tick strip the song back to the soft reggae beat at its heart and reveal all of the strange poignancy of its lyric. It is revelatory in more ways than one. Some of those who analyze Dylan’s songs have noted the way that during the 1980s, and beyond, he seemed to be exploring a duality in his songs between human romantic relationships on the one hand and our search for God, and God’s search for us, on the other. How well does this song, “Night After Night,” fit into that oeuvre?

It’s evidence that Bob Dylan is almost congenitally incapable of doing a complete throwaway; i.e. a song that is just not interesting in any way.

When you hear John McCauley of that band Deer Tick and a number of the other singers on this album, you might well wonder if you didn’t know them previously whether they are actually deliberately aping Dylan’s style of singing on these songs. But they’re not. They do very often sound a lot like him, but on reflecting you realize that it’s because they were influenced by him, or by someone else who was influenced by him, a long time ago. Dylan gets plenty of credit for things these days—sometimes way too much—but one of the things he might not get credit enough for is how much he redefined the rules of singing in the popular idiom. (Now we can all sound like dogs with our legs caught in barbed wire!)

Ivan & Alyosha evoke an uncomplicated joy with “You Changed My Life” that Dylan was probably feeling when he wrote it but didn’t bring off to the same extent in the studio. Marco Benevento’s aching instrumental version of “Every Grain of Sand” reminds us that underneath all of the words, Dylan has a really special gift for an affecting melody, without which he might only be a poet we’d never heard of. Irishman Glen Hansard, an old busking partner of yours truly and so many others, delivers the slow-burning “Pressing On” without dramatic change but with all the sincerity, humility and pain that a truly great gospel song deserves, and “Pressing On” is indeed, after all these years, a truly great gospel song.

“Congratulations,” which Bob wrote and performed with The Traveling Wilburys, is not substantially altered but merely stripped down a bit and sung gently and kindly here by Elvis Perkins. It’s a song that lives right on a hilarious and heartbreaking edge between kindness and sarcasm, and hearing it sung by another musician is evidence enough of what we suspected all along: it’s one of Bob Dylan’s very few perfect songs, on a par with “I’ll Be Your Baby Tonight” in that respect. It is a perfect song because absolutely anyone could sing it, and there is nothing anyone would want or need to change about it.

In the end then, much like Bob Dylan during the 1980s, Bob Dylan in the 80s, the album, turns out to be, quirks and all, well worth hearing and keeping.

Bob Dylan in the 80s (Volume 1) is available via iTunes and also via Amazon.com.