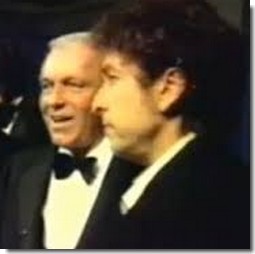 Some of us are date-oriented and some of us are not. By dates, I refer neither to the fruity nor to the romantic kind (though the same statement would probably apply to both) but rather the chronological sort: anniversaries, birthdays, milestones and the like. Some of us are date deniers, wondering whether it matters that such and such happened so many years ago on this date. This day is still little different from yesterday or tomorrow, after all; it’s just another day, significant only for what it achieves for itself, surely, and not its numerical coordination with some other day.

Bob Dylan, however, has apparently been paying some attention to dates. The first track (“Full Moon and Empty Arms”) to be heard from his forthcoming Sinatra-themed album was released to the world last May 13th, the day before the anniversary of Frank Sinatra’s death in 1998 (perhaps someone’s itchy promotional trigger finger caused it to come out a few hours early, at least state-side). And the album itself is being released right here in the first part of 2015 A.D., which happens to be the centenary of Sinatra’s birth (his birth date being December 12th, 1915).

Although this new Bob Dylan album, Shadows in the Night, is not subtitled “My Tribute to Frank Sinatra,” this issue of dates underlines what in any case is made crystal clear by the selection of material: Bob was very much thinking about Francis Albert during the conception and execution of this record. However, hearing his singing, it’s obvious that there was no attempt to ape Sinatra’s renditions, i.e. to be like Frank (and what a foolish mission, albeit that so many have attempted it). So the fundamental tribute that Bob Dylan is making to Frank Sinatra is to Sinatra’s own choice of songs; it’s a tribute to Frank’s taste, and I guess that also means to his preoccupations. Other than in the special case of “I’m a Fool to Want You,” Sinatra had no writing credits on these songs, but he debuted many of them and—in all but two cases (“That Lucky Old Sun” and “Some Enchanted Evening”)—his versions of these songs could not seriously be argued to have been superseded by later ones. (Posterity will have to decide how Bob’s versions rank.)

In a short piece marking the online release of Dylan’s version of “Stay With Me,” a writer named Bob Boilen with NPR opined that no one could ever have expected this kind of album from Bob. Well, for those listeners (small subset though we may be) who have been serious fans both of Bob Dylan and of Frank Sinatra and of the distinct but not unrelated arts of popular song that each represents, I’d suggest that this wasn’t so crazily unexpected, even if we couldn’t have predicted exactly how Dylan would execute it. Some may even have been waiting for this moment.

Let’s recall a few signposts along the way. In 1970, Bob Dylan recorded “Blue Moon,” the Rodgers and Hart standard, on his much-maligned album Self Portrait. His recording of such a conventional, “old hat” popular song was one of the many factors that generated so much opprobrium for the album. (Though of-course, Elvis had also sung “Blue Moon.”) Flash forward, and then quickly back, via Bob Dylan’s memoir Chronicles (published in 2004) where he remembers going with his wife to see Frank Sinatra, Jr. play at New York’s Rainbow Room in the late 1960s. Bob writes about how much he enjoyed the show. Dylan “didn’t care if he was as good as his old man or not,” and writes how he liked his “big blasting band.” Frank Jr. came to Dylan’s table to chat after the set, but was wary (probably wondering if he was being put on) until he could see that Dylan “genuinely liked show tunes.” He obviously could only have picked that up from the way that Dylan spoke appreciatively about some of the songs that Frank Jr. had sung. And Dylan also writes in Chronicles of listening as a young man to Harold Arlen songs as sung by Judy Garland and others, like “Blues in the Night,” “Stormy Weather,” and “Get Happy,” and noted that in those he could “hear rural blues and folk music” and that there “was an emotional kinship there.” And (once more referring to the memoir), Bob Dylan recalls listening to “Ebb Tide” from Sinatra’s Only The Lonely album around 1961 in someone’s apartment in New York’s Greenwich Village, and how he could hear in Sinatra’s voice “death, God and the universe, everything.” But then he writes: “I had other things to do, though, and I couldn’t be listening to that stuff much.”

In 1983, during the sessions for his album Infidels, Dylan recorded a pretty touching version of “This Was My Love,” a song written by Jim Harbert that Frank Sinatra recorded with Nelson Riddle in 1959. (Bob’s version remains available only as a bootleg.)

In 1987, Dylan showed up at a tribute to George Gershwin, and delivered a plaintive, slightly rough, but affecting rendition of the Gershwin song “Soon,” just with his acoustic guitar and harmonica. There was no need for him to do something like this; it seems to me that it was a very deliberate doff of the cap to someone who’d come before and paved a part of that road on which Dylan was traveling, one different to that part paved by Jimmie Rodgers, but ultimately crucial and priceless all the same. In the next few years Dylan recorded (for soundtracks) one-off versions of “Return To Me” and “You Belong To Me,” both songs sung by a variety of artists but likely best known as sung by that scamp Dino Crocetti—aka Dean Martin.

In 1995, Dylan played at Frank Sinatra’s 80th birthday charity benefit concert, delivering a beautifully arranged version of a very old song of his containing so many lines that would have deep resonance for both Sinatra and Bob at that point (and this one): “Restless Farewell.”

Oh a false clock tries to tick out my time
To disgrace, distract, and bother me
And the dirt of gossip blows into my face
And the dust of rumors covers me
But if the arrow is straight
And the point is slick
It can pierce through dust no matter how thick
So I’ll make my stand
And remain as I am
And bid farewell and not give a damn

Previous to the night of that show, it’s been reported that Dylan (along with an up and coming punk from New Jersey named Springsteen) spent an evening with Frank at his house, drinking and singing songs around the piano. (That bootleg has yet to see the light of day but life is about perpetual hope.)

In 2009, Bob Dylan recorded and released Christmas in the Heart, an album of holiday “chestnuts” and hymns, material that would be well known to the likes of a Bing or a Frank or a Dean, and he performed it with all the warm and classic stylings. As much of a shock as it was to most of the world, that move too seemed not so bizarre to those who had already noted Dylan’s affection for the music of the crooners (not to mention his continued interest in matters pertaining to the divine realm).

So, viewed from the perspective of those sensitive to the signs, Shadows in the Night is not so shocking, but that does not in any way mitigate the unbearable delight its appearance inspires. After all, it was never a given. Most pertinently, Bob Dylan might not have lived long enough to reach his comfort level for doing it. He is 73, going on 74. He is being tremendously adventurous, as a singer, to tackle these challenging and complex songs, using his worn instrument for everything it’s worth. He has the kind of band he implicitly trusts to execute the instrumentation behind him.

It would have been wonderful—and I think here I speak for anyone who loves Sinatra—if Frank had been as adventurous and as canny about what he was doing at that same age. He might have recorded some wonderful, intimate, small group things (along the lines of “It’s Sunday”), appropriate for his voice, that would have stood up much better than those big “Duets” albums with which he closed his career. But such is life: few of us make the wisest decisions about how to use our talents, distracted as we are by so many competing interests. Frank gave us his best when he was at his best, and that’s surely enough.

In the end, then, the overwhelming feeling from this quarter is simply gratitude that Bob Dylan is still succeeding in doing exactly what he wants to do, in the way that he wants do to it, and in so doing happens also to be fulfilling the dreams and fantasies of some of those who’ve been fascinated down through all these decades. And many who haven’t listened to the likes of Sinatra, Ella Fitzgerald, and other great interpreters of the same great songbook will have their ears opened by these songs that Dylan has “uncovered,” and that is also a priceless gift.

In between now and when the album is officially released, we at THE CINCH REVIEW will be offering appreciations of some of these great songs, specifically as sung by Sinatra, that Dylan has chosen to reprise. The track list, once again, is this: