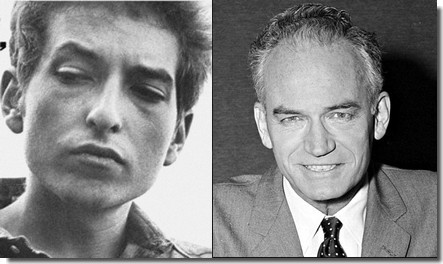 There’s a piece by Paul J. Cella at Redstate called “The irony of Bob Dylan.” It’s largely a reaction to a review of Chronicles written by Jim Kunstler. I guess it comes as a surprise to me that it is still a surprise to some others that Dylan, in Chronicles, names Barry Goldwater (R-Az) as his “favorite politician” around the period of 1961/62. But then it shouldn’t surprise me: his reference to Goldwater didn’t get the kind of attention it warranted in most of the reviews and publicity surrounding that memoir, probably because a whole lot of people didn’t know what the hell to make of it. A reminder of what exactly it was (from page 283 of the original hardcover):

There was no point arguing with Dave (Van Ronk), not intellectually anyway. I had a primitive way of looking at things and I liked country fair politics. My favorite politician was Arizona Senator Barry Goldwater, who reminded me of Tom Mix, and there wasn’t any way to explain that to anybody. I wasn’t that comfortable with all the psycho polemic babble.

Tom Mix was a star of silent westerns. Barry Goldwater of-course was the iconic Republican who wrote “The Conscience Of A Conservative” and was a formative influence on Ronald Reagan. Dylan was writing about the 1961/62 era.

Anyway, towards the end of his piece, Cella says the following:

Given that the counterculture of the Sixties, which tried to set up Dylan as its spokesman or poet-laureate, has conquered and is even now solidifying its preeminence in our society, there is a special and marvelous irony to note.

All the sneering revolt that churns through the great anthems of Dylan’s best work, “Like a Rolling Stone” being perhaps the most well-known exemplar; all the defiance, the fury of impudence; all the challenge thrown vaguely at some contemptible oppressor —

You used to be so amused
At Napoleon in rags and the language that he used
Go to him now, he calls you, you can’t refuse
When you got nothing, you got nothing to lose
You’re invisible now, you got no secrets to conceal.

— all this may be justly hurled with equal passion against the generation, now leading our country toward ruin, which wanted it as its slogan, and which unjustly hurled it against the basically sound social order preceding it.

And Bob Dylan himself may have even meant it that way.

Well, it might be tempting to hear the song as put-down of the then-emerging 60s generation, and you could probably take that interpretation a long way if you wanted to. But I personally would resist that temptation. I think the song works most profoundly as, ultimately, a reflection on the singer’s self. And this particular singer did happen to be breaking out and breaking through on an artistic level at the time that had to be both terrifying and exhilarating — two emotions that balance each other exquisitely in the song, I think. Of-course the song doesn’t have be nailed down, and maybe a lot of its power comes from the fact that it can’t be. I do think, though, that it is very often fruitful to look at songs where Dylan appears to be criticizing and taking apart someone other as potentially being reflections on the self instead. I find it difficult to hear, for example, “Just Like A Woman” or “Sweetheart Like You” other than in this way. (And let Todd Haynes make of that what he will.)