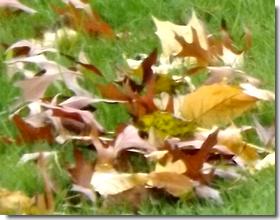 Bob Dylan recently added the song “Autumn Leaves” to what has been for some time a very fixed live set list. He’s long been playing two sets divided by an intermission, and now he is finishing that second set with “Autumn Leaves,” whereupon he and his band depart the stage and are entreated back for the encore, which continues to be “Blowin’ in the Wind” and “Stay With Me.” “Autumn Leaves” is only the second song from his new album Shadows in the Night that he’s chosen to play live (alright: he did “That Lucky Old Sun” live some years back but that’s a different context). Recent accounts say he’s knocking them dead with this song and in fine form overall.

It offers an excuse to reflect again on the remarkable version of “Autumn Leaves” that Dylan has given us in 2015. Previously in this space it was said that “Autumn Leaves” …

… was the first [track] to utterly nail me on my initial listen to the album, and it remains impossible for me to hear it without being frozen to the spot. The guitar introduction evokes a weird and melancholy wind in the trees, and Dylan sings this song from a place that knows only too well the loss at the center of the words. It’s so easy for a performance of a song like this one to be a mere cliché; instead, Dylan meets the challenge of taking it to possibly an even more profound level than one has heard before. His singing conjures the desolation of someone who is not just experiencing another lonely autumn, but one who has no expectation of living for another spring. For all that (which some would would call “depressing”) it is utterly beautiful.

Where did the inspiration for this deeply haunting arrangement come from? I think that one doesn’t have to journey too far. Just play Sinatra’s 1957 version (from Where Are You?), arranged by Gordon Jenkins side by side with Bob Dylan’s, and it’s pretty clear what’s going on. The recording engineer on the album (and accomplished producer in his own right) Al Schmitt has described how Dylan and his band listened to Sinatra’s records in the studio before playing.

The thing is he would listen to the song over and over again and get Sinatra’s kind of intentions on what he was doing with the song and then he would go in — he would only do two or three takes on each tune — but he would make it his own. And nothing to do with Sinatra. He just learned what the song was about. It was an interesting way to work. It was a lot of fun.

I think that Dylan’s vocal is entirely his own, “nothing to do with Sinatra,” to be sure. But I think it’s obvious that the band were indeed reaching for Jenkins’ orchestral arrangement as written for Sinatra. Of-course, with a five piece guitar-based combo as Dylan brought to the studio, you can’t duplicate that, but in reaching for it, you are going to end up making something of your own. Dylan has said that he and his band were rehearsing these songs on the road during sound checks for a long, long time, so in the studio this wasn’t a case of learning it on the spot, but rather getting re-centered on a mood and approach.

And the result speaks for itself. Bob Dylan’s “Autumn Leaves” is an unexpected and quite precious gift. And what a miracle, truly, that Bob Dylan at age 73 (going on 74) is out there on stages across the world performing it.
…

Previously: Review of Shadows in the Night by Bob Dylan.

Addendum: A fan’s recording of Bob Dylan’s performance of this song in New Orleans on April 29th, 2015, is currently available at this link.