(Cont’d from page one.) A couple of weeks later, I received the long-playing records in the mail. Now, I do not want to risk overstating it, but, in all honesty, when I put the needle down on Modern Times, and heard Thunder On The Mountain, a chill went up my spine. It went on and on, and into the delicate Spirit On The Water, and in no small way I felt as if I was hearing the album for the very first time. This was a Bob Dylan album. This, in fact, was a great Bob Dylan album. It was alive, it was natural, it had depth and nuance and poignancy and richness and warmth. My ears and my brain (and indeed my heart) had plenty to keep them interested and occupied. There was nothing boring and nothing blaring about these recordings. The producer “Jack Frost” had nothing to be ashamed of after all: his production was beautiful. 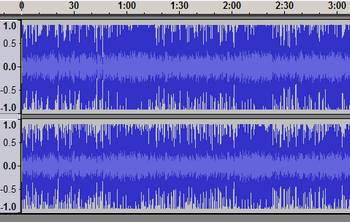 Spirit On The Water — CD version

On Together Through Life, the difference was there again, although a tad less dramatically. But I could feel the songs and performances on the LP getting me in my gut, in the way that great Bob Dylan songs are supposed to, where the CD versions had become strangely wearisome to me.

Comparing the CDs with the LPs and using my own ears left me in no doubt. In an effort — apparently — to make the music more marketable, somebody at Sony/Columbia has been applying extreme levels of dynamic range compression to Bob Dylan’s recordings as mastered for CD, hoping that they would therefore compete better with other contemporary music and jump out of radios and other audio players. Meanwhile, the versions marketed to those audiophiles who are motivated to purchase the vinyl LPs were being left intact, as if those buyers would be the only ones interested in hearing the actual recording with all of its natural quiet parts and loud parts.

The question must be asked: Is Bob Dylan himself aware of this? Well, there are reasons to think that it could well be a case of “something is happening here but you don’t know what it is.” I quoted Dylan earlier in this piece, seeming to struggle (at least in 2006) for a way of describing the problem he heard in modern recordings, but not coming up with a specific diagnosis. Further, in the recording session for a 2005 song called Tell Ol’ Bill, a copy of which has circulated among fans, Dylan at one point is heard saying words to the effect of: “Well, it sounds great in here. I don’t know what it’ll sound like on the record …”. Is it possible that he doesn’t know what’s ultimately happening to the recordings, even though he’s producing the recording sessions himself? We know that he works with recording engineers in the studio, who handle the technical aspects. He’s not into turning knobs and pressing buttons, but he knows what he likes to hear and what he doesn’t like. When he’s recording an album, he ends up with something that he’s happy with, obviously. It may well be unknown to him that the version mastered for the CD later has this dynamic range compression process applied to it, and what that even means might not be properly understood by him. He may have heard the term — indeed, how could he avoid it? — but he may not have a tangible sense of what it does to his own recordings. Perhaps he’s one of those who just presumes that vinyl must be inherently better than compact disc, as a medium, and he thinks that this is the explanation for what he hears and doesn’t hear on his CDs. (Yet, in reality, the compact disc as a medium can handle even greater dynamic range than a vinyl record, if called upon to do so.) There certainly are artists who are aware of the problem and who protest it. Dylan so far has not publicly and explicitly done so.

In any case, this is what I believe: Anyone who bought these CDs has in effect been cheated. They are not getting the music as it was intended to be heard. They are in a true sense not getting what they paid for. (And this includes myself.) I think that there’s a heckuva class-action lawsuit waiting to be brought against the music industry on this issue. Realizing what is going on here makes me lose all sympathy for executives who complain about declining sales and what online file-sharing is costing them. As Dylan himself said in 2006, “It ain’t worth nothing anyway.” Indeed, there is a case to be made that the very distortion of popular music through excessive dynamic range compression has itself impacted sales. When music gives you little pleasure — whether you’re aware of the reason for it or not — you will be less inclined to spend money on it.

People will say: “Well, Bob Dylan has had two number one albums in a row! How can you say there’s a problem?” It’s not complicated: People bought those CDs based on their impression of what kind of music they would contain; an impression influenced by a whole variety of factors. Initially, they would also be likely to be quite happy with the content. It is over time that the music would become dull to their ears, and for reasons that are not going to be obvious to the average listener. (If you don’t know what you’re missing, you’re not going to miss it; not consciously, at any rate.)

So what is any listener to do, who already has the CDs, in advance of the record company deigning to rectify the issue? If you own a turntable, then you at least have the option of buying the LPs. It is obviously an awful thing that anyone should have to purchase the music a second time in order to hear it properly, as I know too well. And if you don’t own a turntable, you understandably will be quite loathe to invest in the purchase of one just for the sake of hearing a couple of albums properly. (Really, you’d have to be nuts.)

Someone who does own the vinyl versions could, of-course, make digital copies of them. The legality of this and in particular of sharing the result with others is naturally open to question, even if those with whom you are sharing it have already spent the money to buy the damaged CD version. Mind you, making high quality digital copies of vinyl records is not always the easiest process. But it can be done, and good copies of the vinyl versions, burned to CD, will be head and shoulders above the officially released CDs (at least the ones which sit on my CD shelves, never to be listened to again).

But the sad reality is that the genuine recordings of these Bob Dylan albums are simply not going to be heard by most listeners, until and unless Sony/Columbia releases corrected versions of them. The most infuriating potential scenario is that, some years down the road, when this issue is more widely understood and accepted, and the era of the “loudness wars” is universally scorned, the record company will actually issue “remastered” versions with great fanfare, so inviting fans to buy the albums all over again. As if they’re doing us all a favor!

Continuing to research this whole issue in relation to Dylan, it seems likely to me that it began in earnest with the “Love and Theft” album (and the LP version of that one is not even in print anymore). My copy of Time Out Of Mind (from 1997) appears to be fine, when the wave-forms are analyzed, and this reflects what my ears hear too. Tell Tale Signs unfortunately betrays the, ah, tell-tale signs of dynamic range compression.

I should note, though, if it hasn’t been clear up to this point, that this issue is also always one of degree. A recording might reflect some signs of dynamic range compression, or it might be more extreme, like what’s called “brickwalling.” (The exact nature of the music on the CDs you own can also depend on when and in what market you purchased them.) In Dylan’s case (and going by the copies I own), it seems to me that Modern Times was the the most heavily compressed in this fashion and therefore suffered the most damage. But it now seems clear enough to me that all three of Dylan’s proper studio albums of the twenty-first century have had excessive dynamic range compression applied, such that a listener’s enjoyment cannot but be impacted over time.

Even more than this makes me angry, it makes me sad. Bob Dylan has been amazingly creative and on-the-ball since entering his seventh decade of life back in 2001. He’s been producing his own albums, really for the first time, and displaying great confidence and skill, and a mastery of all kinds of musical styles and textures. He has written some damned good songs. He’s put down some superb performances, along with the musicians he’s hand-picked to play with him. It is a special and a stellar stage of his long and incredible career, and he has appeared to be professionally happier and more at peace than at any other time. Yet, all along, we have just not been hearing the music as we ought to have been hearing it, if we’ve been listening to these CDs. To my mind, the only word that can properly be applied to this is scandal.
…

In addition to Pete Bilderback’s analysis on this subject (for which I’ll be forever grateful), another good link to follow to find out more about the general issue (from the point of view of a fan of the band Rush, rather than a Bob Dylan fan) is this one, from way back in 2002, but obviously still highly relevant: Over the Limit.