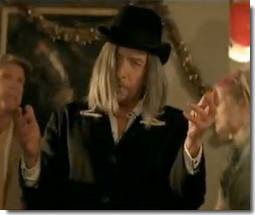 So, Bob Dylan is 72-years-old today. Bob Dylan being that old is not a problem, I think. He wears his age well. As I believe I wrote elsewhere recently, David Bowie being 66 seems a lot stranger than Bob Dylan being 72, and Bowie is a rather uncomfortable and indeed creepy-looking senior citizen. (No offense intended.)

Bob Dylan, on the other hand, started out old. It’s taken him this long to actually become as old as he sounded on his first album. Arguably, he may still have some ways to go. He might be 80 years-old, singing “In My Time of Dyin'” on that debut record.

But he didn’t remain 80 for very long, and he certainly has not aged in the conventional human pattern. Not long after that first album, he obviously got quite a bit younger (“I was so much older then …” etc.). Around 1965/66, Highway 61 and Blonde On Blonde, he was maybe in his late twenties or early thirties. (Although legally and chronologically, he was 24 – 25.)

He made a short foray into his sixties around the time of Nashville Skyline, lazily crooning those old standards he’d just written.

By 1974, and Blood On The Tracks, he had rewound from that and was firmly entrenched in middle age (though his birth certificate asserted that he was 33). Soberly and somberly, he looked back over a life of lost loves and lost chances. Desire, then, and the Rolling Thunder tour, was a mid-life crisis, throwing caution to the wind, dressing silly and hitting the road.

In the early 1990s, with Good As I Been To You and World Gone Wrong, he sounded at least 20 years older than his actual early-fifties-self, and decidedly more comfortable in his own skin.

Ten years later, actually in his sixties, with “Love and Theft” and Modern Times, the way he sounded on record seemed to about match his chronological age again, but now that made everything alright. He sounded like he knew exactly what he was doing and how to do it, and—for the first time producing his own albums and utilizing a regular band both on tour and in the studio—this really seemed to be the case. This comfort level is a double-edged blade; it might remove a certain frisson of artistic tension that made some of his classic albums explode out of the speakers. Still, at the age which Bob Dylan is these days, you ought to know what you’re doing, and not have to fight your way through your recording sessions, and there’s a definite joy in witnessing his mastery of the whole process in these most recent years.

Is the age shifting over now for Bob? Well, it’s hard to imagine him sounding much older than he does now, but I wouldn’t put it past him. The more dramatic route would be to go back to sounding younger. That might indeed be welcome to many, but it seems rather unlikely, at least until he gets to that great hootenanny in the sky.

In any case, happy birthday to Mr. Bob, and many more.