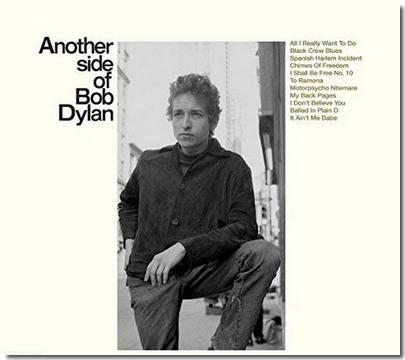 In 1964, Bob Dylan released the album Another Side Of Bob Dylan. While he later complained that he didn’t pick the title—feeling that it was “overstating the obvious”(Biograph interview, 1985)—the album was a departure of sorts, with its unabashed emphasis on the exploration of the internal world, and its lack of obvious “protest” songs. (In fairness to Dylan, he had never released anything on record that was merely a finger-pointing protest song, and he had already written and released numerous and exquisite personal songs like “One Too Many Mornings” and “Boots Of Spanish Leather.”)

This album contained a fairly direct kind of artistic manifesto, in the form of “My Back Pages,” where Dylan clearly is relishing his maturation and his feeling of being liberated from the bonds of narrow political thought. As in these various lines:

Lies that life is black and white
Spoke from my skull
….
“Equality,” I spoke the word
As if a wedding vow.
….
Good and bad, I define these terms
Quite clear, no doubt, somehow.
Ah, but I was so much older then,
I’m younger than that now.

It’s a song where perhaps even Dylan himself would concede that he is speaking in the first-person-Bob (he usually pooh-poohs those who would tie his songs down to his persona and his life – to the confessional rather than the universal). So it speaks of a watershed moment where he realizes that his purpose is not to go down wrangling with the events of the day, and engaging in righteous combat with the “bad” people, on behalf of the “good” (define those terms?).

One might wonder what the process was for Dylan in reaching this point. What events, conversations or dreams told him that he would be choosing the wrong path if he followed the demands of those who would have him write tailor-made songs for all of their causes-de-jour? You might look for some of it in Dylan’s off-the-cuff address at the December 13th, 1963 Emergency Civil Liberties Committee fund raising dinner, where they presented him with the Tom Paine Award. He proceeded to give a speech which put a big dent in their fund raising that night –

There’s no black and white, left and right to me anymore; there’s only up and down and down is very close to the ground. And I’m trying to go up without thinking of anything trivial such as politics.

When later in the speech (which took place 3 weeks after the assassination of JFK) he said that he “saw some of myself” in Lee Harvey Oswald, the crowd’s discomfit turned to outward hostility.

However, one can go beyond the extemporaneous remarks of an uptight and well-oiled Dylan on that night, and look to a published work of his poetry for a window into his thinking during this tumultuous period. On the back of the album cover of Another Side Of Bob Dylan, gathered under the heading of “Some Other Kinds Of Songs …,” there appear a number of untitled poems.

It is in what you could call “Poem # 10” that Dylan portrays some verbal confrontations with a frustrated and angry individual. It bears close reading, and here it is:

you tell me about politics
this that
you speak of rats.
geese. a world of peace
you stumble stammer
pound your fist
an’ i tell you there are no politics
you swear
tell me how much you care
you cheat the lunch counter man
out of a pack of cigarettes
an’ i tell you there are no politics
you tell me of goons’
graves. ginks an’ finks
an’ of what you’ve read
an’ how things should be
an’ what you’d do if . . .
an i say someone’s been
tamperin’ with your head
you jump
raise your voice
an’ gyrate yourself
t’ the tone of principles
your arm is raised
an’ i tell you there are no politics
in the afternoon you run
t’ keep appointments
with false lovers
an’ this leaves you
drained by nightfall
you ask me questions
an’ i say that every question
if it’s a truthful question
can be answered by askin’ it
you stomp
get mad
i say it’s got nothin’ t’ do with
gertrude stein
you turn your eyes
t’ the radio
an’ tell me what a
wasteland exists in television
you rant an’ rave
of poverty
your fingers crawl the walls
the screen door leaves black marks
across your nose
your breath remains on
window glass
bullfight posters hang crooked above your head
an’ the phone rings constantly
you tell me how much i’ve changed
as if that is all there is t’ say
out of the side of your mouth
while talkin’ on the wires
in a completely different
tone of voice
than you had a minute ago
when speakin’ t’ me about something else
i say what’s this about changes?
you say “let’s go get drunk”
light a cigarette
“an’ throw up on the world”
you go t’ your closet
mumblin’ about the phoniness of churches
an’ spastic national leaders
i say groovy but
also holy hollowness too
yes hollow holiness
an’ that some of my best friends
know people that go t’ church
you blow up
slam doors
say “can’t no one say nothin’ t’ you”
i say “what do You think?”
your face laughs
you say “oh yeeeeeaah?”
i’m gonna break up i say
an’ reach for your coat
‘neath piles of paper slogans
i say your house is dirty
you say you should talk
your hallway stinks as
we walk through it
your stairs tilt drastically
your railing’s rotted
an’ there’s blood at the
bottom of your steps
you say t’ meet bricks with bricks
i say t’ meet bricks with chalk
you tell me monster floor plans
an’ i tell you about a bookie shop
in boston givin’ odds on the presidential
race
i’m not gonna bet for a while i say
little children
shoot craps
in the alley garbage pot
you say “nothin’s perfect”
an’ i tell you again
there are no
politics

While this poem is many things, I believe it is fair to say that it is describing a series of disagreements with a friend of a distinctly left-wing persuasion. We know well enough that Dylan wasn’t surrounded by too many conservative ideologues with whom to argue in Greenwich Village in 1963 and ’64. And this person of whom Dylan says,

You speak of rats. / geese. a world of peace.

you rant an’ rave / of poverty

is pretty clearly of a left-wing mindset.

While there’s a lot going on here, I’d like to focus on the elements of hypocrisy and intolerance that Dylan picks up on in his erstwhile friend’s world view.

Hypocrisy indeed—and of a kind that’s not unfamiliar from some on the left. This individual speaks loudly of how he cares about poverty–the proletariat no doubt—the oppressed and the set-upon. However, Dylan spots him gladly getting away with not paying for a pack of cigarettes, not caring or thinking whether the low-paid lunch counter man will see it coming out of his salary—not caring either that he is stealing from a small business trying to survive in the tough city. In his own mind, quite possibly, the thief would justify it by saying that nobody except the “rich” business owner is losing—and that he himself has little money and deserves to have the cigarettes. This is a microcosmic moment and typifies the desire of many on the left to impose utopian ideas on the world at large (preferably through a powerful central government apparatus) while maintaining an easy disregard for applying similar standards in their daily lives and interactions. It’s emblematic of an ideology that plays down personal responsibility in favor of a state-mandated equality. Stealing the cigarettes is OK to Bob’s friend at the lunch counter, because, in a truly fair world, he would have enough money to buy all the cigarettes he wanted. Tobacco companies and small-business owners wouldn’t be organized around making profits; their wares would be provided to the people at a regulated price that all could afford. “From each according to his ability, to each according to his need,” in Karl Marx’s famous construction.

Those forced to spend a lot of time with determined leftists, or those of us who used to be inclined that way ourselves, can recognize the small hypocrisies that Dylan defines in the what are also the sharply observed urban details of this poem.

And for intolerance, Dylan provides this vignette of an illiberal liberal being called out and not enjoying it one bit:

Note, this is not the “born again” fire breathing Dylan of 1979 here defending people who commit the crime-against-the-left of going to conventional churches. This is the 22 or 23 year old Jewish kid from Minnesota, caught up in the maelstrom of early 1960s New York politics, folk-music-singing gurus, Greenwich Village socialists, civil rights activists—powerful personalities, many of whom are sincere and many of whom are bitter and narrow minded, but all of whom see the talented young Dylan as someone they want on their side. They’ve supported him, flattered him when they felt like it, and they fancy he owes them. Where this individual in the poem fits into that network is not defined of-course. However, what a telling piece of deference Dylan gives to this person. When he (the leftist) rails against “the phoniness of churches,” Dylan is not so presumptious as to directly take him on. It’s a riposte so meek it is comical: “Some of my best friends know people” that go to church. Even this, however, is way too much for the friend to take. He blows up, slams doors, says “can’t no one say nothin’ t’ you.” It is not acceptable to him that Dylan should call him to account in any way for his intolerance of churches or church-going folk. He should just go along with the broad brush strokes used to portray the conservative enemy. Truth is secondary to fighting and winning.

So, those are a few of the elements of this poem that I enjoy. Before someone takes me to task, I acknowledge that there is a broader theme here too, of-course, summed up by the refrain: “there are no politics.” It would be overdoing to to view this poem as an endorsement of right versus left. Dylan is also, more broadly, taking apart any mindset that views the world through a narrow, dirty telescope, where everything is political, where everything must be broken down into a cause: a battle to be won against the other side. It’s a criticism that undoubtedly would also apply to someone on the right who cannot live or move without determining what is the appropriately conservative. Is a play or a movie on our side or on the other side? That’s a suffocating way to live one’s life, for anyone.

However, it’s worth noting that it’s not conservative-minded folk who have come up with coinages like “the personal is political,” “art is politics,” and so on, and go ever further in trying to bind everyone to politically correct rules of their own making, proscribing some words and thoughts while mandating others.

Lies that life is black and white, indeed. Bob was so right.