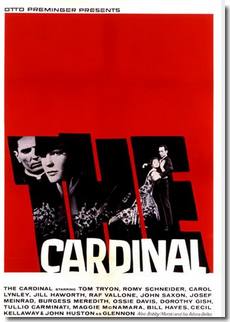 So, on his current tour—or, if you prefer, the current leg of his “Inevitably Going to End One Day” tour—Bob Dylan has been closing his shows in an unprecedented manner, with a song he had never sung in concert before. I’d daresay that precious few singers have sung this song in concert before (and I’d bet the house that no one has ever closed the show with it).

It is a song titled “Stay with Me,” and it was written specifically for a 1963 film directed by Otto Preminger called The Cardinal. Jerome Moss composed the score for the film, and Carolyn Leigh wrote the lyrics for this, the film’s main theme. And the film is about an actual Roman Catholic cardinal; that is, it follows the life of a protagonist named Stephen Fermoyle from Boston as he becomes a priest and goes through various dramas before ultimately rising to that office in the Church. (Curious fact: the “Vatican liaison” on the film was one Joseph Ratzinger.)

The song was first recorded and introduced by Frank Sinatra—no altar boy at that point in the early ’60s, but certainly still a very bankable singer. Why’d Sinatra do it? Well, on the face of it, he had two connections to the work: The same director, Otto Preminger, had given him what was very likely the single best acting role of his life in The Man with the Golden Arm back in 1955. And Carolyn Leigh, the song’s lyricist, had written several of Frank’s biggest hits of the preceding years: “Witchcraft,” “Young At Heart,” and “The Best is Yet to Come.” Not quite as a big a hit as those, but a big personal favorite of yours truly is “How Little It Matters,” one of the most supremely wise and charming paeans to that ole devil called love that one could ever hope to hear.

But as far as I can glean Carolyn Leigh had never written a hymn before. And yet that’s exactly what “Stay with Me” is, if a hymn is (as I think it is) simply a prayer set to music. Considering the character of Stephen Fermoyle, the lyrics are apt, as he confronts many obstacles and goes through many trials but tries to hold on to the only thing that actually matters, that being his faith in God.

So, “Stay with Me” is effectively “Abide with Me.”

Should my heart not be humble
Should my eyes fail to see
Should my feet sometimes stumble
On the way, stay with me

I grow cold, I grow weary
And I know I have sinned
And I go, seeking shelter
And I cry in the wind

Though I grope and I blunder
And I’m weak and I’m wrong
Though the road buckles under
As I walk, walk along

Mind you, I think no one would maintain that it’s quite as great a song as “Abide with Me.” In fact, I wouldn’t say that it’s as great a song as “The Best is Yet to Come,” either, and it’s certainly not nearly as great a Sinatra record. It was ultimately released on the hodge-podge Sinatra ’65 album. Both the arrangement and the vocal are on the formal side, reminiscent of the style of Frank’s album The Concert Sinatra, but more stilted in this case rather than soaring. Instead of Nelson Riddle at the helm, it’s Don Costa, and, well, it is what it is: a very minor footnote in Sinatra’s vast discography. And yet, in 2014, Bob Dylan—of all people—dug it out and gave it another try. We won’t review Dylan’s live rendition here, but it’s safe to say that it is neither formal nor stilted.

Bob Dylan, earlier this year, released on his website a reading of “Full Moon and Empty Arms,” another song first recorded by Frank Sinatra (this time back in 1945). Dylan is expected to be releasing an album of cover versions titled Shadows in the Night next year, and so the speculation is running that it is an album of “Sinatra covers.” That’s a funny concept, of-course, since Sinatra had precious few writing credits. Yet it’s even funnier to this very dedicated fan of both of these individuals that Dylan is so far displaying such a strange taste in songs. Sinatra’s record of “Full Moon and Empty Arms” is alright, but hardly sticks out as one of the greatest things he did during that period (that period being the 1940s, on Columbia Records). This Sinatra fan is s’posin that he himself would pick “Try A Little Tenderness,” or “Nevertheless,” or “I’m Glad There Is You,” or “Put Your Dreams Away” or some other great and tender ballad, as Frank during those years had the voice of an angel, and delivered such songs in a manner somewhere just beyond perfection. By comparison, “Full Moon and Empty Arms” is a tad melodramatic, and—again—formal. For this listener, it’s nice enough but it doesn’t really go anywhere.

Dylan’s version, however, is something else entirely: it is intensely intimate and moving.

So, is that the theme of the forthcoming album? “Songs I Can Sing Better Than Sinatra Did”?

Well, who knows? Why the hell not?

Analyzing Bob Dylan’s concert set lists is a long tradition. Why did he play this song or the other one; what does it mean? What’s He trying to say? (As if he of all people hasn’t said far more than enough.) I’ve been guilty of this kind of thing too. But it’s overwhelmingly likely that Bob just plays what he feels like playing, of-course, and for some reason we feel compelled to project some meaning upon it, topical or otherwise. On recent tours, he’s been following unusually rigid set lists, dominated by songs of the last couple of decades, and closing with a wonderfully cheery rendition of “Blowin’ in the Wind.” It must be conceded that it is therefore at least somewhat remarkable that he would pick this odd little song, written for this relatively obscure film, stuck on a pretty darned obscure Sinatra album, with which to close out his most recent shows.

All in all, I just think it’s a shame that Carolyn Leigh isn’t still around (she and Jerome Moss both died in 1983), to hear Bob Dylan’s take on her words, all these years later.

Sinatra, at least, was around to hear Bob Dylan’s tribute to him in 1995, which I think was also one of the most beautifully arranged live performances Dylan has ever delivered.

Addendum 7/31/2016: At the time of writing the above, I had not yet heard Dylan’s own version of “Stay With Me.” Having now listened to it many times, I realize my first thoughts about the song (as sung by Sinatra) were overly flip. It is truly a very profound and piercing prayer: something which Dylan obviously perceived better than just about anyone and then revealed so well in his own heartfelt rendition. The song captures the pain of a soul who has turned away from God in its metaphor of a lamb wandering in the darkness, growing cold, and conversely the wonder of that soul finding that wherever he may turn, God is there again. It’s an exquisite hymn which expresses so well the hopelessness of life without God, despite our constant inclination to stray from Him, and the irreplaceable preciousness of those times when we can sense His presence. Dylan has used it as his closing number in so many of his shows now, and in a way it serves as an anchor to all of these “popular standards” that he has chosen to uncover; these grand expressions of undying romantic love and/or unbearable lovelorn loneliness are shown through the prism of “Stay With Me” to reveal sublime angles on our relationship with God, and God’s relationship with us. It is a great song, and Dylan’s take on it is a helluva record.