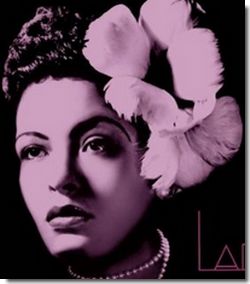 Today’s the centenary of the great Billie Holiday’s birth, on April 7th, 1915. She died far too soon, only 44 years on the earth. Although she packed a good deal of wonderful music into her career, imagine what she’d have accomplished given another couple of decades; with her light, unstrained but supremely articulate way of singing (and given good health) she could have gone on to make masterpieces and electrify audiences well into her old age. Looking back from the perspective of 2015 it seems like hers was one of the first of the celebrated premature deaths of great musical talents that became a long tragic string.

But perhaps that itself is a false perspective; perhaps people have always had this tendency to glamorize the tortured artist or poet who dies too young, too sensitive for this world. Whatever the case, I say screw all that. It’s never a good thing for that talent and that life to come to such an abrupt stop. Imagine Bob Dylan dead in 1966 from the excess and pace of his life then; what a waste to an extent we’d never even have appreciated. Imagine Sinatra in his gloom of 1952, swallowing something lethal or slitting his wrists: what an unspeakable tragedy that we’d never have heard his greatest work still then to come.

None of this is to blame Billie Holiday in the slightest way. She had to fight multiple real demons, and seems hardly to have gotten a break from birth to the grave, from A through Z. What’s amazing is that she managed to record so much great music during the time she had, and stay so true to her talent, and have such a transformational impact on popular singing (most notably on Frank Sinatra, who himself then impacted so many others, and whose centenary is also celebrated this year).

Using that talent, singing as only she could do, surrounded by other hip, gifted musicians, and in her element, she communicated a joy of being alive that soared in spite of the broken world through which she tripped.

(From The Complete Billie Holiday on Columbia.)