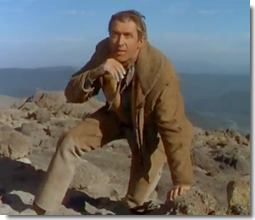 Yours truly and his better half happened to be watching the classic western movie “Bend of the River” the other night night (directed by Anthony Mann and starring James Stewart and Arthur Kennedy), and I had one of those weird Bob-Dylan-fan-déjà-vu moments. A line spoken by one of the characters started a Bob Dylan song going in my head, but I didn’t quite locate which song it was in my mind until after the film was done. The line is spoken by Arthur Kennedy (playing the outlaw Emerson Cole) to Jimmy Stewart (playing the reforming-outlaw Glyn McClyntock), as Cole is leaving McClyntock behind after hijacking the wagons that were bringing desperately-needed supplies to some settlers in Oregon. Previously, the Stewart character had saved the Kennedy character from being hung by vigilantes. Since then, there had been a number of additional violent scrapes, and Kennedy’s character had arguably saved Stewart’s life at least a couple of times. So, after robbing and abandoning him, he says this to Stewart/McClyntock: “I figure we’re even. Maybe I’m one up on ya.”

Dylan incorporated this into his 1986 song “Driftin’ Too Far from Shore,” in the last two lines of the following verse:

Or, of-course, it could just be a coincidence. But Bob Dylan’s penchant during this period for taking lines from various films—in particular from westerns and film noirs—has been pretty well documented, and indeed this particular example has already been known out there for a long time. I don’t memorize these things when I read about them, however, so when it came around in the film the other night it was as if it was new to me. Then I looked it up the next day to confirm I’d heard it right.

“Driftin’ Too Far from Shore” isn’t one of my favorite Bob Dylan songs. The album from which it comes—Knocked Out Loaded—is essential for “Brownsville Girl” but most of the rest of the songs come across as novelties or curiosities. I think that his cover version of Kris Kristofferson’s “They Killed Him,” complete with a chorus of little children, is one of the weirdest things Bob Dylan’s ever done, far more out there than the Christmas album (which, by contrast, I love wholeheartedly).

Who knows what he was thinking with this album? The curious thing about “Driftin’ Too Far from Shore” is that there is already an old country gospel song called “Drifting Too Far from Shore,” and Dylan knew it very well. In the Martin Scorsese documentary, “No Direction Home,” Dylan states that he heard this song when he was a child, on a record someone had left behind on a record player, and the moment is very clear in his memory; he says that hearing it made him feel like he was “somebody else.” One can easily draw the inference that this started him on a path to becoming that “somebody else.” (And maybe he’s still headed there.) This being the case, you would think that when it came to writing his own song, with exactly the same title but for the dropped “g,” that Bob Dylan would make something incredibly special out of it. But I at least am not the one to make the case that it rises to any great level. It does certainly seem to me that it is one of his crypto-religious songs, of which a better example is “Maybe Someday” from the same album. But “Driftin'” doesn’t move me in any particular way.

The line from the movie (“I figure we’re even – maybe I’m one up on ya”) is nothing special bereft of context. But in the context of the film, it’s a pretty big line, as what the Cole/Kennedy character is talking about is a matter of life and death. He’s indicating that he believes he’s saved Stewart/McClyntock’s life more often than McClyntock has saved his. McClyntock’s reaction demonstrates that he does not put very much stock in this. I’d agree with those who maintain that Jimmy Stewart is the greatest-ever American film actor, and the westerns he did under the direction of Anthony Mann would have to be a key part of understanding why he’s earned that accolade. The way in which Stewart conveys a simmering and sometimes-explosive rage in these films is quite something; at times it is genuinely frightening. “Bend of the River” has less of this than the other Mann/Stewart westerns—since Jimmy is playing a reforming outlaw—but this particular scene is one where it surfaces. As it happens, this very scene is on YouTube at the moment:

(And, for whatever reason, full-length versions of the film are also on YouTube at this time.)

In general, “Bend of the River” is probably the most-uplifting and so the softest of the Anthony Mann/Jimmy Stewart westerns, but I think it is no less great for that.

So, a great film, and a mediocre song (at least in my opinion) are joined together in the ether for all time. Dylan has described in interviews how he would jot down lines he heard and fit them into songs later. Perhaps, in using this line, he felt he was getting at some idea about salvation, something about the crazy argument that man has with God about who is in a position to demand what of whom … but on the other hand maybe I’m flattering Bob with this line of reasoning (what a thought!). It’s not that I think this kind of thinking is beyond Dylan, but rather that the song as a whole seems unrealized. And I just plain don’t like the tune, or the record they made out of it back then. I wonder if anyone else would make a case for it.

More importantly, if you haven’t yet seen the film, you’d be doing very well to make time for it, not to mention the rest of those Mann/Stewart westerns. Dare I say it, they ain’t makin’ them like that any more.