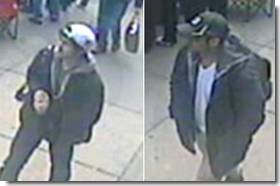 I don’t personally watch very much television, and essentially zero television news. Like many others these days, I suppose, I largely read about the news that interests me on the internet. Yesterday was an exception, albeit that the television news broadcasts I was watching came via the internet, consisting of local Boston coverage of the pursuit of the marathon bomber(s). The tone of what I was watching fairly shocked me, the more so as the day went on. I know that political correctness is a very powerful force, but I would have thought that given the gravity and drama of what was going down, it would be superseded by a more fundamental journalistic drive to get at the truth. In this I was naïve.

The syndrome at work was epitomized by an interview I saw take place with some casual friends of 19-year-old Dzhokhar Tsarnaev at UMass Dartmouth. They regularly played soccer with him, and, as with seemingly the great majority of his acquaintances, they had only benign things to say about him. The reporter interviewing them (I think it was WBZ but I couldn’t swear) was naturally enough trying to dig up anything that might have indicated that the younger Tsarnaev was capable of setting bombs to kill random innocent people. She was coming up empty in terms of his general demeanor. People seemed to find him likeable, if quiet. So, she asked: “Did he ever talk about politics?” She got a negative response. The interview went on a little bit, and then she asked the same question: “Did he ever talk about politics to you?” The same answer came back: no, he did not seem very concerned about political issues. The interview continued, with more on his general behavior and school-related activities. Then (as I recall it) she asked yet another time: “Did he ever talk about politics?” It got the same answer from his soccer-playing acquaintances as before: no, he did not. Asking the same question three times seemed kind of silly, but the really crowningly-silly thing was the avoidance of asking a fairly similar question that surely was crying out to be asked, given the circumstances. That would have been: “Did he ever talk about religion, about Islam?” Despite the knowledge at this point that he was a Muslim from Chechnya, where an Islamist insurgency has been active for years, and despite the knowledge already being disseminated elsewhere regarding various internet postings by him and his older brother indicating their favor for extreme Islamic ideas, a simple question to his friends about whether he discussed religion with them was seemingly off-limits. I have no idea what their answer would have been—whether he kept that aspect of himself private or not—but surely the question begged to be asked. Asking about “politics” over and over again was, I think, the reporter’s attempt to ask it without actually using the relevant word, as if some kind of crime would be committed by the mere suggestion from her that religious ideas might possibly have played a role in the violent terroristic actions of two young Muslim men.

Yet, what political goal could possibly be furthered by killing and maiming innocent, ordinary civilians at the finish-line of the Boston marathon? Could it somehow advance the cause of independence for Chechnya? Hardly; as their own uncle pointed out yesterday, this event has seriously damaged the image of Chechnya and Chechens in America, and it could do no other. Politically, the United States opposed the military tactics of the Russians during the Chechen war, even if nothing practical was achieved by the opposition. But there is clearly no manner in which killing helpless Americans today in Boston could aid any Chechnyan political cause. And I would maintain that there is no way it could aid any current political cause whatsoever.

The seeming irrationality of the act is leading many to dismiss the Tsarnaev brothers instead as “nuts.” And I think that it is fair for someone to dismiss them as crazy, so long as that same person also dismisses Osama Bin Laden as merely crazy, and the nineteen hijackers on 9/11, and the 7/7/2005 London bombers, and the Fort Hood killer, Nidal Hasan, and the Little Rock killer, Abdulhakim Mujahid Muhammad (aka Carlos Bledsoe), and the shoe-bomber, Richard Reid, and the underwear-bomber, Umar Farouk Abdulmutallab, and countless other killers and suicide bombers who have been practicing their murderous craft in myriad far-flung corners of the globe in the name of jihad, all believing and proclaiming that they have the blessing of Allah in carrying out such acts against infidels or against corrupted fellow Muslims.

At rock bottom, it is only the belief that some people are not people, that they are sub-human, that allows someone to place a bomb down behind their legs and stroll cheerfully onwards, and rejoice as they are killed and maimed; innocent children, women, and men, blown apart as they were standing on a street corner cheering their friends and relatives for finishing a 26-mile run on a beautiful Patriot’s Day in Boston. This belief, in the case of the jihadists, does not come from some merely political manifesto, but instead from specific religious teachings which they have embraced so deeply as to blot out what we like to think of as basic human compassion.

Last night in his remarks, President Obama referred to the “still many unanswered questions,” including, “Why did a young man who grew up and studied here … resort to such violence?”

One might think that nearly twelve years after the September 11th atrocities we would be well able to discuss these things openly and honestly, with the massive track record of jihadists across the world out there to examine. Yet, it seems it’s only become more difficult. The limits of the discussion have in the minds of many only become more proscribed.

There’s no simple answer to the problem of jihadism and to the problem of Islamic supremacism and the violence and oppression it spreads around the world, but a refusal to even discuss it on its own terms only guarantees a failure to deal with it. Ignoring this elephant in the room shouldn’t be the policy of Muslims of good will or of those who bear genuine good will towards Muslims. The elephant likes to scream “I’m not here” as it goes on trampling people. We are the truly foolish ones if the best we can do is stand around and endlessly wonder why.