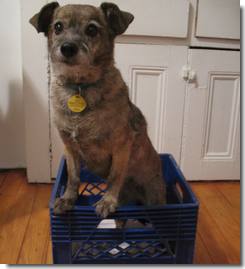 In the “viral” video embedded at bottom, a dog—a Husky named Blaze—is being asked to go into his kennel, and repeatedly and audibly he says “No.” The clip is getting millions of hits, with people all over the world chuckling at the dog’s close approximation of human speech, just as the two men in the video are laughing out loud at the dog’s protestations. Everyone’s laughing at what they hear, it seems, but nobody is actually listening to the dog. In fact it’s just what Simon and Garfunkel sang about all those years ago: “People hearing without listening.”

Despite what some people will say (“my dog loves his crate; he feels so secure in it”) dogs naturally hate being penned up in kennels and crates for long periods. Who wants to be put inside a box from which you can’t escape, and inside of which you can barely move?

Of-course, before a puppy is house-trained, the necessity and utility of confining him or her in a very limited space is understandable. But after being grown up a dog doesn’t need to continue to be treated like … like some kind of animal. END_OF_DOCUMENT_TOKEN_TO_BE_REPLACED

Dogs of every size and shape can easily be intimidated by a lounging feline, and turned into nervous, dithering wrecks by nothing more than a little cat’s impassive stare. If there were any doubt, the video embedded below compiles more than ample documentary evidence to that effect. END_OF_DOCUMENT_TOKEN_TO_BE_REPLACED

My abusers, in their terrible arrogance, took photographs while they tortured me. They should have realized that these things always get out. END_OF_DOCUMENT_TOKEN_TO_BE_REPLACED 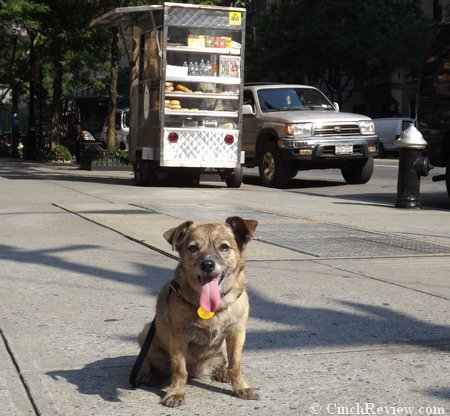 Around nine o’clock this morning, it was already absolutely sweltering in the sun in New York City, and it’s headed up to 99 degrees today, at least. Try walking on the hot pavement when your entire body is spread out only four inches above it. The concrete and asphalt absorb the sun’s rays and radiate that heat right back out. Fuggedabout your feet; your whole body gets cooked so much it only needs mustard and a bun to finish it off. END_OF_DOCUMENT_TOKEN_TO_BE_REPLACED