What a difference five or six days make. In a certain sense, at least. I visited the Gagosian Gallery on Madison Avenue in New York City last Saturday afternoon, with two companions, to view the exhibition of Bob Dylan’s “Asia Series,” which was described in a press release as “a visual journal of his travels in Japan, China, Vietnam and Korea.” I’m not an expert on the visual arts, nor someone who invests any significant amount of either passion or money into that area, but as I wrote when the exhibition was announced, I thought (as a long-time dedicated fan of Bob Dylan) that it would be real nice to have this opportunity to see some of his much-talked-about artwork up close and personal, the way it’s meant to be seen. Pictures on the internet or in a book only go so far. A painting is what it is based not only on the pure image but on qualities like texture and size which you can only appreciate when you’re right in front of it (I’m no expert but I’ve been in enough museums to at least know that much).

So we went to see Bob Dylan’s paintings last Saturday afternoon. I’ve been meaning to write a little on it ever since, but I didn’t really have much of significance to say; other than that, yes it really was nice to see some of his artwork up close and personal. So I was putting it off for an idle moment which wasn’t in a hurry to arrive.

In the last couple of days, however, a huge brou-ha-ha has developed over this exhibition, as explained in this Daily Mail story and countless others. The gist of it is that quite a few of these paintings are not of unique scenes that Mr. Dylan encountered during his concert tours in Asia, but are in fact based on old and classic photographs taken by some quite well-known photographers. (And not loosely-based either.) It seems perhaps to have set off the firestorm which previous allegations of plagiarism against Bob were merely kindling. But that remains to be seen. Certainly, it has to be deeply embarrassing for the gallery which characterized the work as something which it simply is not; i.e., a personal travelogue by Bob Dylan.

If it had been a personal travelogue by Bob, one would have had to conclude that the guy really gets around on these quick concert tour stops in Beijing, Shanghai, Ho Chi Minh City, etc. I mean: visting opium dens, rural markets, seeing farmers on deserted mountain roads, monks posing in statuesque fashion, a real live cockfight, and having a sketchbook in hand to capture the scene in every case? Viewing the exhibition in person, it didn’t seem to me for a minute like Bob had personally seen all of these scenes in real life as portrayed. But it didn’t really matter to me. They were Bob’s paintings, and I was seeing them, and that was that. If I had been considering shelling out a few grand to buy one (and I don’t know how much they fetch, but I guess rather less after this controversy) then maybe I’d be more concerned with questions like that. But I didn’t pay anything to see them, and was simply glad to have the opportunity. I liked a few of them quite a bit: one of the portraits in particular, titled “Mae Ling,” and a couple of the broader scenes, one titled “Shanghai” and one titled “The Bridge.” The others were largely alright.

I was surprised, it being a Saturday afternoon, how thin was the attendance; there were just two or three people besides us during our approximately 25 minute visit. I would have thought a free exhibition with Bob Dylan’s name on it in New York City would have gotten a bit of a crowd on its first open Saturday afternoon. But I was grateful to be able to view the paintings at ease and for as long as I liked. 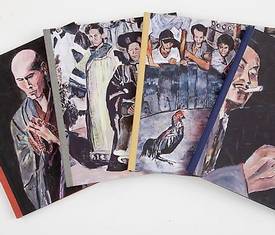 Bob Dylan can paint from photographs if he wants to, obviously. If he doesn’t tell people that that’s what he’s doing then it seems to me that he’s risking some unhappy customers—the ones who actually buy the work. The paintings should not have been described by the gallery as a “visual journal of his travels,” and it seems fair to say that he shouldn’t have allowed them to embarrass themselves by doing so. I guess the parties will work that out between themselves. It’s no skin off my nose; I’m still glad I got to see some of his paintings in person just this one time.

What does it say about the whole Bob-Dylan-as-plagiarist question, not just in the visual arts but in songs and so far one volume of memoir? Well, if nothing else, it shows that he has no fear regarding the issue. He just went ahead and painted from photographs that were bound to be recognized by someone. (It’s unclear at this point whether he may have obtained permission in any or all cases.) Whether having no fear about it makes it OK, or just brands him as some kind of lunatic, I don’t know. I’m not going to buy any of his paintings, and I wasn’t going to before this, so in a way it’s just academic to me. As far as the music goes, what he creates—drawing from whatever sources—is still identifiably and uniquely his, through whatever alchemy takes place. And I find it more often than not to be inspiring, amusing and consoling, as so many people do. I’ve written often enough about his music that I think I should just leave it there on this occasion.

I think it’s beyond debate that people generally don’t mind things being highly derivative or “copied” if they love the end result. But on the other hand they don’t like feeling that they’ve been fooled either. It may be an absurd example, but no one went to see the modern “Godzilla” movie that came out in the late 90s thinking it had been made up out of whole cloth. They knew the “character” of Mr. Zilla came from those old Japanese monster movies. If instead they didn’t know, but found out much later that it had been ripped off from some obscure film that few had seen, would they be upset? It’s an interesting question, I suppose. Most people would say it’s just better to be upfront about things if you’re using someone else’s work as a template for yours. Dylan has integrated lines and melodies from old songs into his own musical work for so long that that kind of thing must seem as nothing to him. Painting someone else’s photograph and allowing it to be portrayed as entirely your own work is a little different, though. Of-course he did say in the interview accompanying this exhibition that he sometimes works from photographs, in addition to real life, but the Gagosian promoted the exhibition in rather different terms. It gets back to the notion of being upfront about things.

It will be interesting to see how it all shakes out in the art world.

Addendum: You might also want to see Harold Lepidus’s post on some of the twists and vagaries of this story.