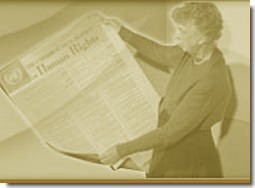 Article 18 of the United Nations Universal Declaration of Human Rights is simple enough and says the following:

Everyone has the right to freedom of thought, conscience and religion; this right includes freedom to change his religion or belief, and freedom, either alone or in community with others and in public or private, to manifest his religion or belief in teaching, practice, worship and observance.

This document was adopted by the U.N. General Assembly in 1948, and eventually (by 1976) it was included in two larger “Covenants” which were ratified by a sufficient number of member states to take on the force of international law.

Yet, even though 90 percent of what comes out of the U.N. may constitute pure drivel, and the other 9.9999 precent may be sheer toxic horror, at least when people are waving around notions of what the U.N. supposedly stands for and the sanctity of international law and so forth, it might be as well to remember this particular part and see that everyone who is in the room can account for where they are in relation to complying with it.

And that was in a way the point of one little debate in the upper chamber of the British Parliament last Sunday: “to take note of international compliance with Article 18 of the Universal Declaration of Human Rights concerning freedom of belief.”

Rabbi Jonathan Sacks (former Chief Rabbi of Great Britain) was among those who spoke, and his words included the following:

The persecution of Christians throughout much of the Middle East, sub-Saharan Africa, Asia and elsewhere is one of the crimes against humanity of our time, and I am appalled at the lack of protest it has evoked. […] What is happening to Christians in these places is the religious equivalent of ethnic cleansing. We must not forget either, as others have said, that the vast majority of victims of Islamist violence and terror are Muslim, and our hearts go out to them too, as they do to members of all other persecuted groups such as the Baha’i in Iran, and so many others. […]

That people in the 21st century are being murdered, terrorized, victimized, intimidated and robbed of their liberties because of the way they worship God is a moral outrage, a political scandal and a desecration of faith itself. I believe that God himself weeps at the evils being committed in His name. Let us urge, as strongly as we can, the worldwide implementation of Article 18 as one of the great challenges of our time so that we can all exercise our fundamental right to live our faith without fear.

Sacks articulates that very well, but what is most striking is just how rarely we hear anyone in important places of power saying anything resembling this. There are several large regions of the world where genocidal-type violence against Christians is occurring at this very moment, and has been going on for an extended period. Where are the press conferences by various world leaders wanting to get on the record expressing their outrage and stating how unacceptable it is? Where are the U.N. Security Council resolutions demanding it end? Where are the protests by people of conscience and concern on the streets of Western cities (where we see protests over so many other non-local issues)? How many hashtags and retweets can we count relevant to this merciless brutality which continues on such a massive scale?

It would be helpful to any of us to sit down and think out why certain kinds of massacres and persecution are attracting so little attention and concern, while other events—even when they are on a much smaller scale and not nearly as morally black and white—dominate the headlines and generate protest across the globe. It would be helpful, as I suggest, to figure that out, but on the other hand it’s not the kind of figuring that is likely to bring a smile to one’s face and put a spring in one’s step.

Nevertheless, these are likely important things to know and understand as we move along with the times.