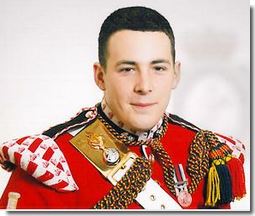 So, there is a testimony of actions on May 22nd, 2013, on this street in Woolwich. It looks something like this: The two killers were driving in a car. They saw the soldier, who we now know to be Lee James Rigby. (Whether this was a chance encounter or a carefully planned one is yet to be established.) They swerved their car into him, pinning him against a road-sign or other obstacle. Now that he was injured and disabled, the two men got out of the car with their knives and proceeded to hack him to pieces while yelling “God is great.” That was their act of bravery and their statement of devotion to their god and their chosen culture. And they spent the rest of their time making sure that their pictures were taken and their voices recorded taking credit for what they did and why they did it.

And then we have the actions of the three women, who were unarmed, and who were not there on that scene that day with any mission in mind. They just happened to be passing by and could have continued passing by, or could have merely drawn out cell-phone cameras as others did. Instead, all three of these women were willing to confront the two blood-stained killers with nothing but their sense of what was decent. One, Ingrid Loyau-Kennett, felt that speaking calmly to the killers could keep them from killing others, before the police arrived. The other two, Amanda and Gemini Donnelly-Martin, felt some sense of duty to the soldier whose blood was streaming into the London street. They felt that he should not be left like that. The daughter, Gemini, is quoted:

“We did what anyone would do. We just wanted to take care of the man. It wasn’t brave. Anyone would have done it. It had to be done. They [the killers] said women could pass.” She added: “The only thing people need to worry about is that poor man’s mum.”

They prayed beside his body as one of his killers ranted for posterity to the cameras about the goodness and justice and holiness of his actions.

There is nothing else that needs to be said in drawing the contrast in courage and in goodness, but I’ll say something else anyway. In the culture that those two killers and others like them are genuinely determined to spread as far and wide as they can, all three of those women would have been beaten mercilessly, if not killed, merely for leaving their houses uncovered and without the accompaniment of an adult male relative. In growing areas of the world, this way of life is as real and as brutal as the blade of the butcher knife that cut through that soldier’s neck.

These three angels of Woolwich, by their actions, told us a number of things, the most profound of which are inexpressible, but one of the things they told us—in case we doubted—is that there are ordinary people on the streets of London who are not beyond caring.

Addendum: And there has been a huge surge in support for the charity “Help for Heroes,” which raises money to help wounded British servicemen and women. Lee James Rigby is reported to have been returning to his barracks after attending a “Help for Heroes” event for a wounded friend, and he was wearing one of the charity’s t-shirts when he was attacked.