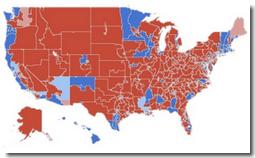 After the 2012 election, yours truly effectively resigned from commenting on partisan political topics, because … well, for a lot of reasons: getting my prediction dramatically wrong; being depressed by the prospect of the future; and accepting that other kinds of writing are ultimately more enduring (to the extent that anything emanating from this source could possibly be enduring). The world of political punditry and prognostication was greatly shaken by this resignation, naturally, but I’m not sure that anyone else who turned out to be wrong in the prediction business chose to jump off the same cliff. That’s fine; to each his own. Two years later, and with another shift in the political landscape in the U.S., it affords an opportunity to consider whether I made the right decision or not. And I think the answer is that the decision was correct: things turned out after 2012 just as depressingly as expected, with national politics cemented in debilitating trench warfare, and with no progress towards ends that (in all seriousness) I and some like-minded folk consider to be of life and death importance. In fact, there’s only been deterioration with regard to the issues that matter most to me. That’s not a reason to give up taking a stand in the way any normal citizen does, but I guess I continue to feel it is a reason not to let oneself be consumed by the minutiae in the whole depressing fight. There are other things in life, even when the sky is falling.

So, the landscape has changed after this election, in a significant but not altogether surprising way. Things are cyclical (in itself a depressing concept to linger upon very long). However, what will persist is the fact of continued trench warfare, and the absence of resolution to those matters most urgent and most grave.

I’m not disinterested in it—still being relatively speaking a political junkie—but I’d be lying if I maintained that I wasn’t fundamentally fatalistic. What’s wrong in America is wrong in the hearts of Americans, speaking in the broadest possible sense, and it won’t be fixed by trading some House and Senate seats. I actually think that there is a grim blueprint that is being followed, and that it’s destined to play out extremely painfully, albeit with some respites here and there.

But that’s no reason to get down. Life—beautiful life—goes on. Here’s to the winners, and, since those wins are only temporary, here’s even more to the losers as time marches on. Like Frank says, bless ’em all.

Addendum: What a terrible downer! Apologies if this has that effect on anyone. To the extent good things have happened, one should be happy about those things. And keep up the fight.