You could call it the story of the heroic octomom. Ohio’s Fox 8 has reported on the turn of events in a town called Eastlake.

The location was a trailer occupied by a man named Paul Kirschstein and an unnamed roommate. They were both asleep. The man’s dog, Coco, who had just given birth to eight puppies about four days previously, jumped on Kirschstein’s bed and pushed him to wake him up. He noticed a haze, and then heard crackling. The trailer was going up in flames. He woke his roommate and was rushing for the door, when, by his account, his dog stopped and gave him a meaningful look. He then went back and fetched her eight puppies. All people and canines escaped unharmed. The trailer was gone within minutes. 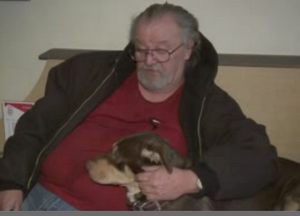 Now, of-course, self-preservation is an instinct common to all animals — so some might say, “What’s the big deal?” in response to this or many other similar stories of dogs alerting their owners to fires. But the mere instinct for self-preservation, by itself, would only lead an animal to attempt to save itself — by, for instance, scratching at a door to try to escape. Coco instead realized that she had to wake up her owner, not only to save herself, but to save him, and ultimately her puppies too.

Mr. Kirschstein is quoted as saying, “There is no better dog than the one [I’ve] got.” And that could be true, although Coco might have been a little more careful than to end up as an unmarried mother of eight. But, you know, that kind of thing is going around these days.

Man and dog and puppies are now in a hotel room — presumably thanks to the Red Cross, who commonly assist fire victims — but are without a home and apparently without much in the way of resources. Mr. Kirschstein would benefit from someone willing to foster his dog while he goes to work (he’s a truck driver) and looks to find another place to live. And it seems pretty clear that there are eight puppies that will need homes themselves. People able to help should contact Fox 8 in Ohio.