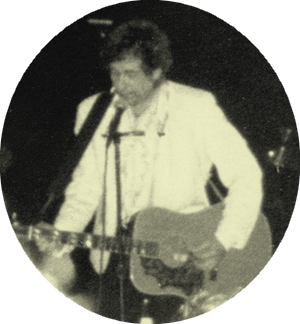 Back in the year of our Lord two thousand and eight, on November the fourth, Barack Obama was elected to the presidency of the United States. Bob Dylan happened to be playing a show in Minnesota that night, and came back for his final encore obviously having heard the news backstage on how the electoral contest was going. He introduced his band as he normally did and then made some off-the-cuff comments, which were covered back then in this space in excruciating (although highly accurate) detail.

I wanna introduce my band right now. On the guitar, there’s Denny Freeman. Stu Kimball is on the guitar too. Donnie Herron as well, on the violin right now, playin’ on the steel guitar earlier. George Recile’s playin’ on the drums.

Tony Garnier, wearin’ the Obama button — [applause] alright! — Tony likes to think it’s a brand new time right now. An age of light. Me, I was born in 1941 — that’s the year they bombed Pearl Harbor. Well, I been livin’ in a world of darkness ever since.

But it looks like things are gonna change now …

Change was the thing: it was “hope and change,” the theme of Barack Obama’s campaign, as older readers might remember.

Dylan’s remarks caused quite a hoopla, hailed ’round the world as an optimistic endorsement of the new president, who would clear away all of that post-Pearl-Harbor darkness for Bob and for everyone.

We took a different view here, as expounded upon in that post way back then. In short, we thought Dylan was being ironic and philosophical rather than triumphalist.

Things always change, of-course. And things have changed. An age of light? With all respect to Tony Garnier’s touching optimism, I think there is now probably exactly no one who would say the past eight years have been an age of light (albeit that we may have wildly varying reasons for saying so).

I was greatly struck, and still am, by Bob Dylan’s performance at President Obama’s White House in February of 2010 (just one year into that presidency), billed as a “Celebration of Music from the Civil Rights Era.” He showed up and played only one song, “The Times They Are a-Changin’”; not as a celebratory duet with Joan Baez (who was also there that night) but in a new, spare, and quite melancholy arrangement.