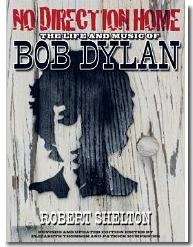 Perhaps the first cover version Bob Dylan ever seriously took on was the Johnny Mercer / Harold Arlen tune, “Accentuate the Positive.” He sang it for relatives, at the age of four, after first insisting that everyone must keep very quiet. It became a part of Zimmerman family lore: it was the moment when people first said, “That kid’s some kind of genius!”

People have been saying the same thing ever since, along with many more colorful things.

That story is recounted in the first serious Dylan bio (and arguably the best), Robert Shelton’s No Direction Home: The Life and Music of Bob Dylan.

I don’t know whose rendition the young Bobby Zimmerman might have heard which inspired him to learn the song. There were plenty out there, including by the redoubtable Bing Crosby. But it would also be cool if it were this one: Louis Armstrong, from a live radio broadcast on New Year’s Eve in 1945. (Bob Dylan would indeed have been four years old.)

Keep on the sunny side.