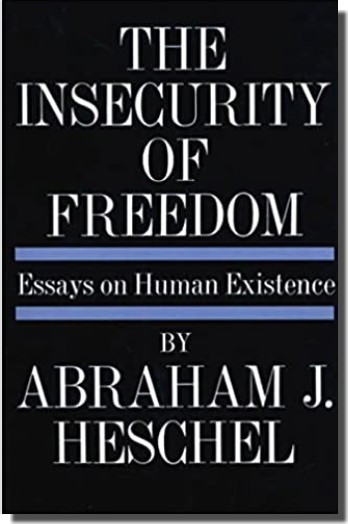 and was struck by this paragraph:

Into his studies of the Bible the modern scholar brings his total personality, his increased knowledge of the ancient Near East, his power of analysis, his historic sense, his honest commitment to truth—as well as inherent skepticism of biblical claims and tradition. In consequence, we have so much to say about the Bible that we are not prepared to hear what the Bible has to say about us. We are not in love with the Bible; we are in love with our own power of critical acumen, with our theories about the Bible. Intellectual narcissism is a disease to which some of us are not always immune. The sense of the mystery and transcendence of what is at stake in the Bible is lost in the process of analysis. As a result, we have brought about the desanctification of the Bible.

Similar things have no doubt been said in many different ways, but I think that is extraordinarily well put. Those words were written in 1963. They struck me when I read them more on a personal level than as a societal or institutional criticism, although the “desanctification” of the Bible surely has had plenty to do with the rotting away of the mainline Protestant churches in America.

But personally, in coming to terms with faith later in life—as opposed to having a religious education that I embraced and which stuck—I’ve done a lot of reading and absorbing of information and of lessons and of ideas. The curiosity about matters of faith has been something like a ravenous appetite at times. Reaching here and there, one comes across things that appear fascinating at first but then turn cold and dead in one’s hands. The problem may be a soulless academic approach or that “intellectual narcissism” to which Heschel refers. Specifically when it comes to the Bible, and to rephrase Heschel above, when the analysis is only about sources and history and context, and fails to consider how the text is taking our measure (and the measure of the writer) then it falls flat.

An important fact which I try to keep in mind is that faith does not demand any particular level of book smarts. A person of the most meager intellectual capacity can still know and be known by God. Literacy, or even the ability to speak, are not prerequisites. God speaks to the soul and the soul responds. Therefore—at least as far as I’m concerned—when one gets into areas of study where what is being discussed can only ever be understood by the intellect, and not by the soul, then one is in an area of superfluity, regardless of how many PhDs are floating around. What is found there may be interesting, diverting or entertaining, but it’s not ultimately relevant, and the detour may also be a waste of time. One of the special things I love about Heschel’s writing is that it never seems to stop asking questions of the soul.

3 thoughts on “Abraham Joshua Heschel on the Bible”