Today (a Sunday) I thought I’d go down there for reason #1: tourism. Mainly, it’s been so long since I’ve been there that I wanted to see in person how far construction on the “Freedom Tower” had come. However, we’re not supposed to call it the “Freedom Tower” anymore, since that apparently scared people—and isn’t freedom a scary thing?— so it’s just “One World Trade Center” now. In any case, the last time I had been down there there was virtually nothing above ground. It has pained many of us for the past decade to have a big hole in the ground down at Ground Zero, and I wanted to replace that mental image. 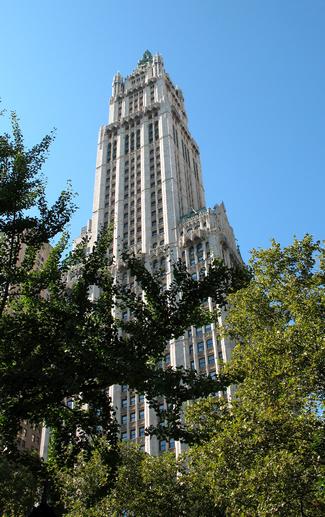 Getting off at the Brooklyn Bridge/City Hall subway stop, I paused at the very civilized little park there and gazed at the Woolworth Building. I always snap pictures of that when I’m down there. It’s one of my two or three favorite skyscrapers in the city. It was the world’s tallest building when it was finished in 1913, and its magnificent architectural touches led it to be dubbed the “cathedral of commerce.” I guess it’s always tickled me that such a grand and glorious building bears the moniker of “Woolworth,” a chain of discount stores that in my lifetime I associated with the cheapest kind of knockoffs and doohickeys (and boy do I miss shopping there since they all went defunct). 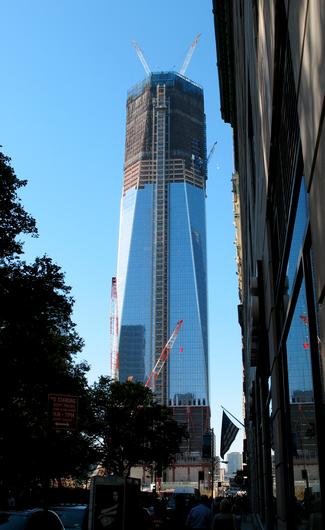 From there it was just a little ways down Broadway to Vesey Street, from which vantage point I took the picture at right of the Freedom Tower—uh, excuse me, the One World Trade Center tower. It looks like it’s somewhere over halfway done, height-wise. When it’s finished, with its accompanying spire, it will reach 1776 feet, and will be the tallest building in the United States.

About that name: I think some people, like me, were already in the habit of thinking of it as the Freedom Tower. Despite the official change-of-name, I wonder if the original moniker might stick in general usage. New Yorkers (and perhaps people in general) can be stubborn that way. In 1945, Sixth Avenue in New York was renamed “the Avenue of the Americas,” to honor the larger geographical neighborhood in which the United States resides. Sixty-six years on, and despite the fact that the street-signs bear that title, no one who lives in New York City refers to it as anything other than “Sixth Avenue.” Only tourists with their maps call it “Avenue of the Americas.” So we’ll see how the Freedom Tower fares, versus “One World Trade Center.”

In any case, it will be very good, if also very overdue, to have something very big again in the sky down in lower Manhattan. Living in this city, I often used to orient myself when emerging from an unfamiliar subway stop downtown by looking for the Empire State Building to the north or the Twin Towers to the south. For people who always remember those towers being there, losing them is comparable to people in some other part of the country losing a hill or mountain that always took up space in the sky.

Getting closer, I took a more artsy shot of the glass facade of the new building reflecting the old Woolworth Building. 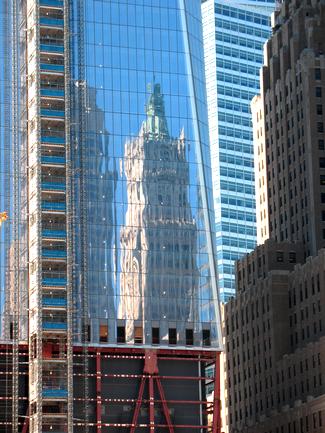 Long may Manhattan island be the bedrock for buildings that stretch towards heaven.

From there, I thought I ought to mosey down to Wall Street—a few short blocks away—and see if there was anything outrageous to see in terms of protesters and protestiness in general. I came upon what was clearly the site of the “Occupy Wall Street” protest, at the intersection of Wall St. and Broadway, but there was really very little to see. The protesters were literally penned into a small squarish plaza. When the protests began, we were having an early onslaught of very cool fall weather in New York. Today, however, summer was back in a big way, with temperatures in the high 80s, and the plaza was baking in the sun. All I could think was: “I’m so glad I’m not in there.” A picture from where I stood (at a safe distance) wouldn’t convey it, and in any case if anyone wants to see pictures of those protesters they are all over the media. Going there in person convinced me that the weather will likely proscribe this phenomenon. When it gets too cold to comfortably lay out there with one’s iPhone or iPad and bemoan the horrors that capitalism has wreaked upon us, the protests will end. Period.

Turning left on Wall Street proper, I saw that all kind of barriers had been set up, but that tourists were still able to make their way down the sidewalks and see the sights. [Do not fear to come to New York City on vacation: this “Occupy Wall Street” protest is about as impressive as a mosquito at a rodeo.] I took the requisite touristy snap. 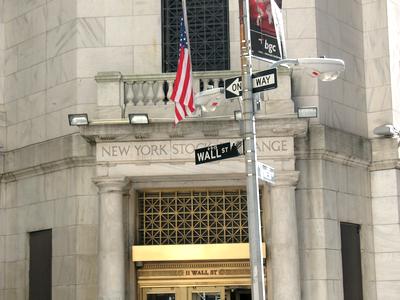 Then I thought it would be cute to have my little terrier Billie pose with a Wall Street address in the background. She complied, as she always does, and during the time it took me to take this picture, innumerable tourists took many more of her, so don’t be surprised if it turns out to be a new New York City icon. 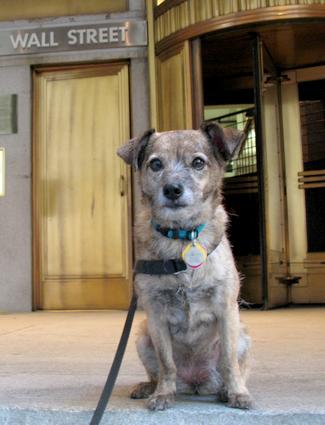 And I think that her dogged determination is a suitable symbol for stinking capitalists everywhere.

(From there we wandered around and up, through the backstreets of Chinatown to the old shops on Orchard Street, and had a very nice day indeed. New York’s a helluva town.)