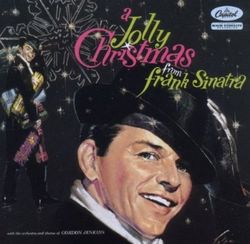 , one of Sinatra’s great sets of lovelorn ballads, this one arranged by Gordon Jenkins, who likewise is the arranger for A Jolly Christmas. Jenkins had his strengths and weaknesses as an arranger, but there’s no doubting that his particular style is crucial in making A Jolly Christmas the unique kind of Christmas record that it is.

One of Jenkins’ special characteristics was a penchant for high, keening strings, which could sometimes veer towards being excessively lachrymose or repetitive. On this Christmas record, he mixes relatively restrained but emotive string arrangements with the backing vocals of the Ralph Brewster singers. A sense of sparseness behind Sinatra’s vocal is key to creating the special mood. And mood was the thing during these years; Sinatra is often credited with giving birth to the idea of the concept or mood album, and when you listen to his records of this era it’s clear how much attention was paid to not allowing anything to appear out of place or to offer a jarring note. (Ironically, the strength and integrity of these moods have been well-demonstrated by the modern practice of sticking on “extra” tracks at the end of the CD editions of the albums; these tracks, generally recorded in separate sessions and/or with different arrangers, stick out like sore thumbs, notwithstanding the fact that they’re almost always excellent recordings on their own terms.)

On A Jolly Christmas, Sinatra and Jenkins create and hold a very particular mood, quite distant from that of the average Yuletide platter. When listening to this album the overwhelming image evoked in my mind is that of Frank Sinatra, alone, maybe at a window of his apartment, singing his songs into the crisp, dark night. (“It Came Upon a Midnight Clear”, you might even say.) There are those backing singers, of-course, but they seem a little bit distant and somewhat unreal, as if they might only be singing in Sinatra’s head, where the orchestra is also gently playing. We are hearing the accompaniment that Frank is hearing, but it somehow seems like it’s just a single man, alone, delivering a kind of tribute to Christmas into the nighttime air.

As mentioned, it’s not necessarily loneliness that is being evoked, but merely aloneness. The album kicks off on its lightest note, with a pleasantly hip take on “Jingle Bells,” finger-snapping although without actual finger-snaps. (Pursuant to care being taken with the mood, the first side of the LP features six non-religious Christmas songs, and side two features six Christmas hymns. No collisions between the secular and the devotional are tolerated.) Mel Tormé’s “The Christmas Song” is given a quite wistful treatment, as if the singer is rehearsing all of these traditional aspects of Christmas which he loves, but he is not necessarily experiencing them at that moment. There’s no need to add any wistfulness to “I’ll Be Home for Christmas,” one of those songs whose meaning is exactly the opposite of its title. Singers have milked that one for all its worth over the years, but Sinatra delivers a terrifically restrained performance worthy of being savored. As secular Christmas songs go, “Have Yourself a Merry Little Christmas” is probably closest to achieving a sacredness of its own. The song walks an exquisitely fine line between celebrating the season and mourning the trouble in all of our lives. Interestingly, Sinatra asked the lyricist, Hugh Martin, if he could improve on one of the lines. The couplet went:

Someday soon we all will be together, if the fates allow
Until then we’ll have to muddle through somehow

Reportedly, Sinatra called Martin and said, “The name of my album is ‘A Jolly Christmas.’ Do you think you could jolly up that line for me?” Martin replaced the “muddle through” line with “hang a shining star upon the highest bough.” And the full couplet became:

Through the years we all will be together, if the fates allow
Hang a shining star upon the highest bough

And I think that’s a quite lovely substitute, a kind of subtle entreaty to keep one’s chin up, and actually the rewritten version became more popular with singers and listeners. In fact, both the original and rewritten lines are good in their own way, and some singers include both these days, simply singing that verse twice and alternating. But again it shows Sinatra’s unshakeable focus at this point on keeping a certain mood; “until then we’ll have to muddle through” set off some kind of internal Frank alarm, apparently. It was heading too much into the crying-in-your-whiskey area, which he was quite happy to do at other times, but to everything its proper place. He could have simply picked another song, but Martin came through with the rewrite, and the rest is musical history.

When it came to side two, and the hymns, there was surely some risk of it all coming across as incongruous or even cynical. This was still the 1950s, after all. Frank Sinatra, unlike Bing Crosby, did not have a Fr. O’Malley persona he could don at will. Any halo he may once have worn went away for good when he divorced his first wife, Nancy Barbato, in 1950, after a well-publicized affair with Ava Gardner. He then wedded Gardner, but their marriage was rather the opposite of a model of love and faithfulness, and in fact their own divorce was finalized in the same year this Christmas album was released. But again, if you ask me, the magic of mood creation saves the day.

One of Sinatra’s greatest gifts was his ability to get deeply inside a lyric and then express it in his singing seemingly without effort. He paid very close attention to words. He would have been very aware, then, that songs like “Hark! The Herald Angels Sing” and “O Little Town of Bethlehem” are indeed solemn hymns, not just holiday chestnuts. They were written to be sung in churches, and they include words and thoughts and feelings of deep spiritual import. Sure, you can belt them out like “Rudolph the Red-Nosed Reindeer” if you want, but you will not be giving them the treatment they deserve. Frank Sinatra at his best always gave songs the treatment they deserved (except when he gave them treatment far beyond what they had previously seemed to deserve).

In this case, Frank seems to carefully take note of the hallowed ground on which he is stepping with these songs, and he sings them with a marked humility underlying their joy; in other words, he sings them like any poor sinner should.

Listening to him perform these Christmas hymns, my mental image shifts slightly. Sinatra has left the apartment where he lives alone (it is now perhaps 1:00 a.m.) and he has wandered into a small, abandoned church. It is very dark. He looks up and maybe he sees, through the empty space where a window once was, the light of a small twinkling star. He sings these Christmas hymns into the night, with reverence and a bit of what we used to call “fear of God.” The backing singers in his head are revealed as an angelic choir.

Lest I go overboard here, I think he screws up with “Adeste Fideles.” It’s a little strained, a bit pompous; if he couldn’t fix that with the performance then maybe he should have gone with a different tune.

The album ends rightly with a moving “Silent Night,” and there it is. Sinatra, in my mind’s eye, goes home, alone, but not necessarily lonely; he pours himself a drink and smiles. Christmas is a wonderful thing, even if one is standing aside and mostly just watching other people celebrate it.

Like Sinatra’s other albums of the period, it does something of an injustice to this one to break it up and separate tracks out. It’s meant to be listened to in its entirety at a single sitting. That makes it a rare Christmas album indeed.

Whether you are alone or not this year, by choice or unavoidable circumstance, may you have a jolly Christmas.